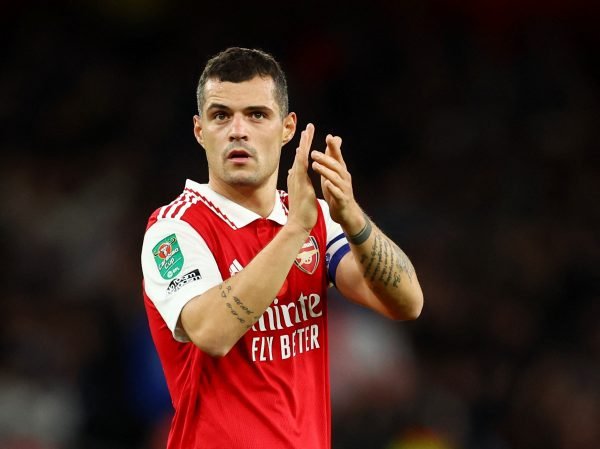 Mikel Arteta watched his Arsenal side lose to Brighton and Hove Albion in midweek’s Carabao Cup with a heavily-rotated starting line-up.

The defeat probably won’t affect the Spaniard too much, with much greater prizes on offer this term, winning a first Premier League crown since 2004 being the priority, however, it was a chance to win a trophy and continue to build this newfound winning mentality at the club.

Arteta must unleash Granit Xhaka on Wolves tonight to counter the lack of bite in the pitch against Brighton.

The chalkboard
Although Xhaka was criticised during his time at Arsenal, the midfielder has reached new heights in this campaign.

Arteta has made the 30-year-old a more dynamic player than he was in the past, adding more goals to his game and assists.

Arteta has done a great job in Xhaka’s transition to a more creative player, with just 13 Premier League matches.

This hasn’t just led to more goals and assists, the Swiss international has also made 1.5 key passes per match while he has succeeded with 67% of his attempted dribbles, showing he has the added confidence to beat players with ease.

The Spaniard has dubbed the 30-year-old as “phenomenal” previously, while Gunners legend Ray Parlour has been particularly pleased with Arsenal’s start to the season, especially with Xhaka, saying he has been “absolutely brilliant this year” and if he continues his current form, the North London side will be in with a great shout to add a trophy or two come to the end of the campaign.

It may have taken six years, but Xhaka finally appears to be delivering for the club on a consistent basis and Arteta will hope he doesn’t come back from the World Cup fatigued, or even worse, injured.