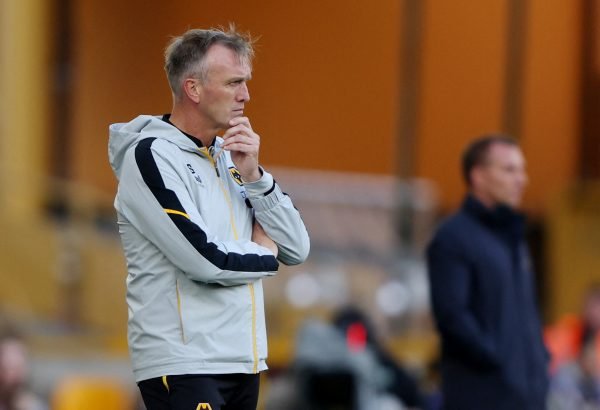 Wolverhampton Wanderers face Premier League table-toppers Arsenal in their final match before the midseason break due to World Cup.

The Old Gold have finally hired a new manager, with 56-year-old Julen Lopetegui appointed last week, however, he won’t take charge of the club until after the break for international football.

Steve Davis led the Molineux outfit to a midweek EFL Cup win over Leeds United courtesy of a late Boubacar Traore strike as the interim manager made six changes from the loss to Brighton & Hove Albion last weekend.

Predicted Wolves XI
Jose Sa will return to the team after being rested against Leeds midweek. He will be aiming to keep just his fifth league clean score this season.

Nathan Collins and Max Kilman will form the heart of the Wolves defence and they will be flanked by Nelson Semedo at right-back – who served his one-match ban in midweek – and Hugo Bueno at left-back.

Two changes will take place in the midfield following the victory over Leeds.

Ruben Neves will keep his place and he is currently the club’s highest scorer this season with four goals, while Matheus Nunes will hope to put in a solid performance before joining up with the Portuguese World Cup squad.

The £100k-per-week Joao Moutinho will drop to the bench in favour of Boubacar Traore – dubbed a “dribbling machine” by analyst Liam Henshaw – and he will look to build upon his goal against Leeds.

Adama Traore will keep his spot on the right wing while Daniel Podence will return to the left.

Goncalo Guedes will be the leader of the line after he scored against Brighton last weekend.

It will be tough for Wolves tonight to achieve a positive result, but it could be a great way to head into break with a new era under Lopetegui.