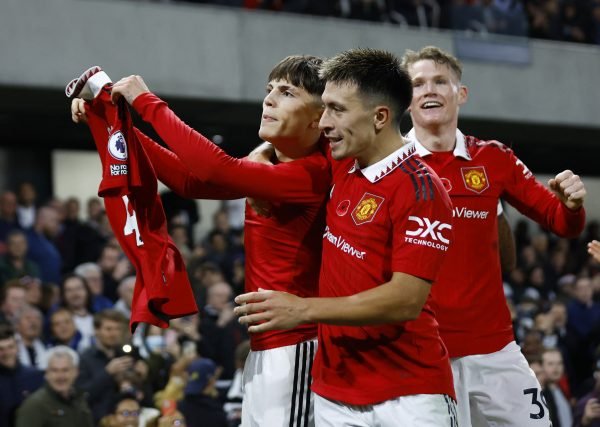 Manchester United headed into the World Cup break on a high on Sunday evening with victory over Fulham, with Erik ten Hag’s leaving it late to secure all three points following what was an entertaining encounter at Craven Cottage.

The visitors had got off to the perfect start as Christian Eriksen poked home for his first goal for the club since his free transfer arrival in the summer, although the Red Devils’ recent attacking woes were laid bare as they again missed a spate of chances to extend their lead, with the returning Anthony Martial notably squandering a handful of inviting openings.

This profligacy was eventually punished just past the hour mark, as substitute Daniel James got himself on scoresheet against his former club. United had been caught on counter and the Welshman tapped in at back post.

Even without their talisman Aleksandar Mitrovic, Marcos Silva’s men still posed a real threat to what was something of a makeshift United backline, with USA international Tim Ream notably heading over from close range, while the impressive Joao Palhinha saw an audacious overhead kick beaten away by a stubborn David De Gea.

It had looked as if it may be the Cottagers who would go on to snatch the points to continue their fine return to the Premier League, only for the away side’s emerging hero, Alejandro Garnacho, to steal the headlines after slotting in at the death.

Fresh from his starring role off the bench in the midweek win over Aston Villa – in which he laid on two assists – the devastating 18-year-old again proved the difference maker after entering the fray in the closing stages, with the young Argentine having perhaps staked his claim for a more prominent role when club action resumes at the end of next month.

While the post-match talk will rightly be centred on the teenage starlet, it was the forward’s compatriot Lisandro Martinez who arguably stole the show from his defensive berth, with the diminutive centre-back having once again showcased his growing importance to the Old Trafford outfit.

Are Martinez United’s players of the season?

But not for me!

Amid the initial doubts over his place in English football – namely from Sky Sports pundit Jamie Carragher – the former Ajax man has arguably become the first-choice pick at the heart of the defence, with skipper Harry Maguire resigned to the substitutes bench.

On a night in which the visitors’ backline was tested, the 24-year-old was more than up to the task, notably winning seven of his ten total duels, while also recording a staggering haul of eight clearances having dealt with much that arrived in his own penalty area.

Aside from losing one foot race with the lively James late on, the nine-cap sensation hardly put a foot wrong once again, having been simply “superb” in the words of Manchester Evening News journalist Samuel Luckhurst.

What was arguably most impressive about the defender’s display was his typically reliable quality in possession, having become almost like an extra playmaker for his side with his ability to pick out teammates from deep, notably teeing up Martial with a lofted pass in the first half with one of his eight final third passes.

The 5 foot 9 colossus has arguably been the club’s “player of the season” so far – according to Luckhurst – with his £56.7m capture from Amsterdam seemingly becoming a more astute purchase with each passing week.