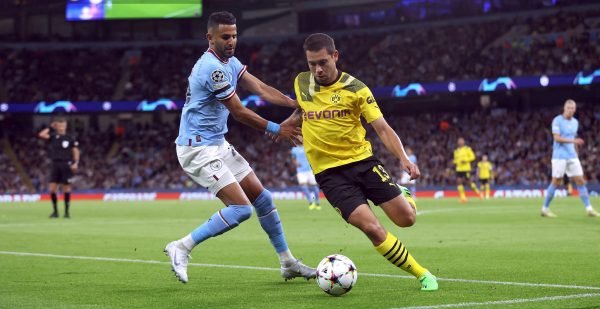 According to reports, Leeds United may be considering a January move for Borussia Dortmund leftback Raphael Guerreiro.

What’s the word?
That’s according to journalist Pete O’Rourke, who had the following to say to GIVEMESPORT on a potential deal:

“I think he would be a huge upgrade for Leeds at left-back, which has been a real problem position for them for the last couple of seasons.

“If they’re able to lure Raphael Guerreiro to Elland Road, I think it’d be a real coup for the club.”

The exciting asset had also drawn interest from Manchester City in the summer, outlining his credentials as a fine option for the Whites.

Huge coup
The 28-year-old maestro – who has been named in Portugal’s official squad for the upcoming World Cup – has earned praise for his consistently impressive performances in Germany over the past few years, having scored 37 and assisted 39 from defence.

This form, under different bosses, boasts a consistency rarely seen at Elland Road in recent times, during a turbulent time for the club.

The 56-cap star has continued to impress this season despite his side’s poor form, with six goal contributions already detailing him as one of the standout players for the Black and Yellows.

His versatility is also outlined as a huge factor in his marketability, with his former sporting director Michael Zorc labelling the £81k-per-week star “a great footballer”

Bringing in such a high-profile recruit would mark a huge coup for Jesse Marsch, as noted earlier by O’Rourke, and could finally spell the end for the wholly disappointing tenure of Junior Firpo.

The 26-year-old flop had made the move to Yorkshire as an athletic fullback with a desire for staying on the front foot. Being from Barcelona, he had great recommendations.

In recent seasons under both Marcelo Bielsa and Marsch the 26-year-old’s performances have instead sparked vast amounts of criticism and questions about his place in the team.

The defender was notably described as lacking “defensive awareness” by former Leeds goalkeeper Paddy Kenny before he answered his own damning question about Firpo’s future: “Is he good enough for Leeds and to wear that shirt? No, I don’t think he is.”

He has a European pedigree beyond any other club, and creativity that is better than most. It is not difficult to imagine Leeds tempting him to Leeds, as they look to avoid being dragged into a relegation scrap.