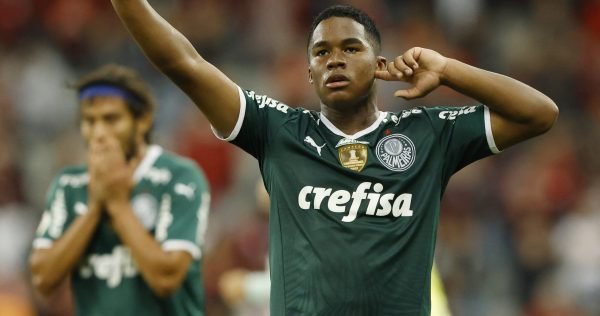 Graham Potter is currently going through a tough time as Chelsea manager. Since a 2-0 win against Aston Villa, 16 October, Graham Potter has not won in Premier League.

With today’s match against Newcastle United being the last before the World Cup halts the domestic season, Potter will be aiming for all three points before turning his thoughts to the January transfer window.

Chelsea already look like they have made a head start, with Fabrizio Romano claiming that the club are “frontrunners” along with Real Madrid and Paris Saint-Germain to sign Brazilian sensation Endrick.

The 16-year-old has a release clause of €60m (£52m) and while this may seem expensive considering his age, the youngster’s potential is frightening.

His prodigious talent is enough for Chelsea to welcome his family to their training ground. Thiago Silva, a fellow Brazilian, was even invited to help in the hope that Endrick will sign for the London club.

At just 16 years old, he became the youngest Palmeiras player. He was also just 16 months and 16 days when he made his debut.

Journalist Renato Maurício Prado described him as a “phenomenon” while speaking to News.TVS.24 (via Football London) and also that he could be “like Neymar” which would be massive for Potter.

Indeed, the Englishman might just unearth a new £200m talent – the fee that Neymar was sold to PSG for in 2017 – in Endrick, but he faces some serious competition for his signature.

It seems that he has settled into professional soccer despite his young age. Chelsea supporters shouldn’t expect immediate impact from the forward.

Vinicius Jr. was just 16 when Real Madrid signed him from Flamengo in 2017. It would take four seasons for Vinicius Jr. to score more than ten goals in a LaLiga season. This is a testament to the fact that even the most talented players can adapt.

With Potter inheriting a side that the previous manager Thomas Tuchel had built, there is no doubt he will be given money to spend in January, with Endrick potentially being one of the 47-year-old’s first and most exciting signings in west London.