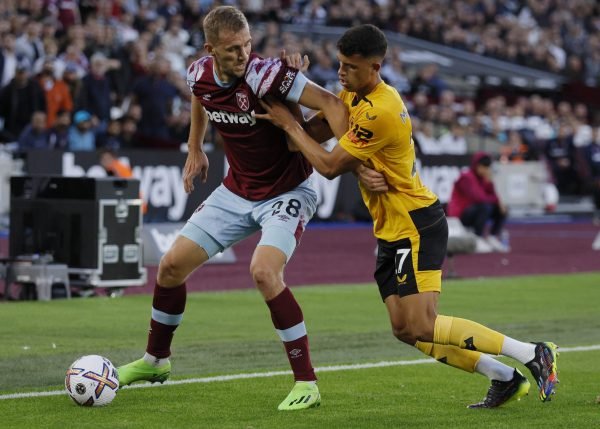 The Hammers head into the fixture off the back of what has been a torrid run, having won once in their last five in the league, and dropped as low as 15th, with just two points separating them from the relegation zone.

While their European form is nothing short of spectacular, it seems that David Moyes, their manager seems incapable of translating their six wins into domestic success.

They were also knocked from the EFL Cup on Wednesday by Championship side Blackburn Rovers, adding to the misery.

The Irons appear to have fallen short of their expectations after a summer of huge spending. They will now be hoping that a win at London Stadium can bring back the good times with a long break inbound.

To give themselves the best possible chance of this, the Scotsman must consider dropping the consistently underwhelming Tomas Soucek from the starting side, given how he has scored just once all season despite joining as a forward-thinking midfielder.

The 27-year-old titan had initially been an instant hit in the capital – with his debut season boasting a tally of ten league goals across the season – although the Czech Republic international’s drought has drawn questions about his benefits outside of scoring.

It is not just his lack of goals that has provoked his critics, however, but the 6 foot 3 goliath’s overall displays have not been good enough., with journalist Alan Rzepa outlining his “awful mentality” after his shocking display in their loss against Everton.

What number of points did West Ham score at the end of the Premier League season?

Another journalist in Josh Bunting took to Twitter to critique the midfielder at the back end of October, stating: “West Ham need to take Tomas Soucek out of the team for a period, has struggled all season.”

With fewer goals and little defensive security in midfield, as he is dribbled past 1.1 times a game, the £65k-per-week dud has had his opportunities over the last season and a half.

His time is over, and he should be dropped for the crucial clash with Foxes.