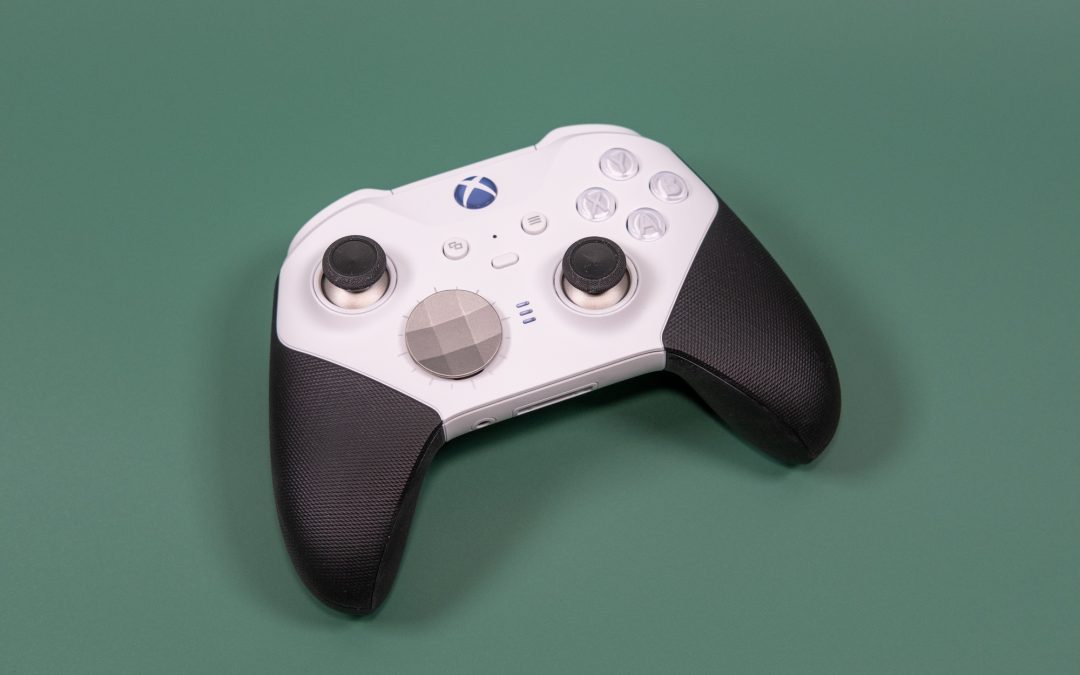 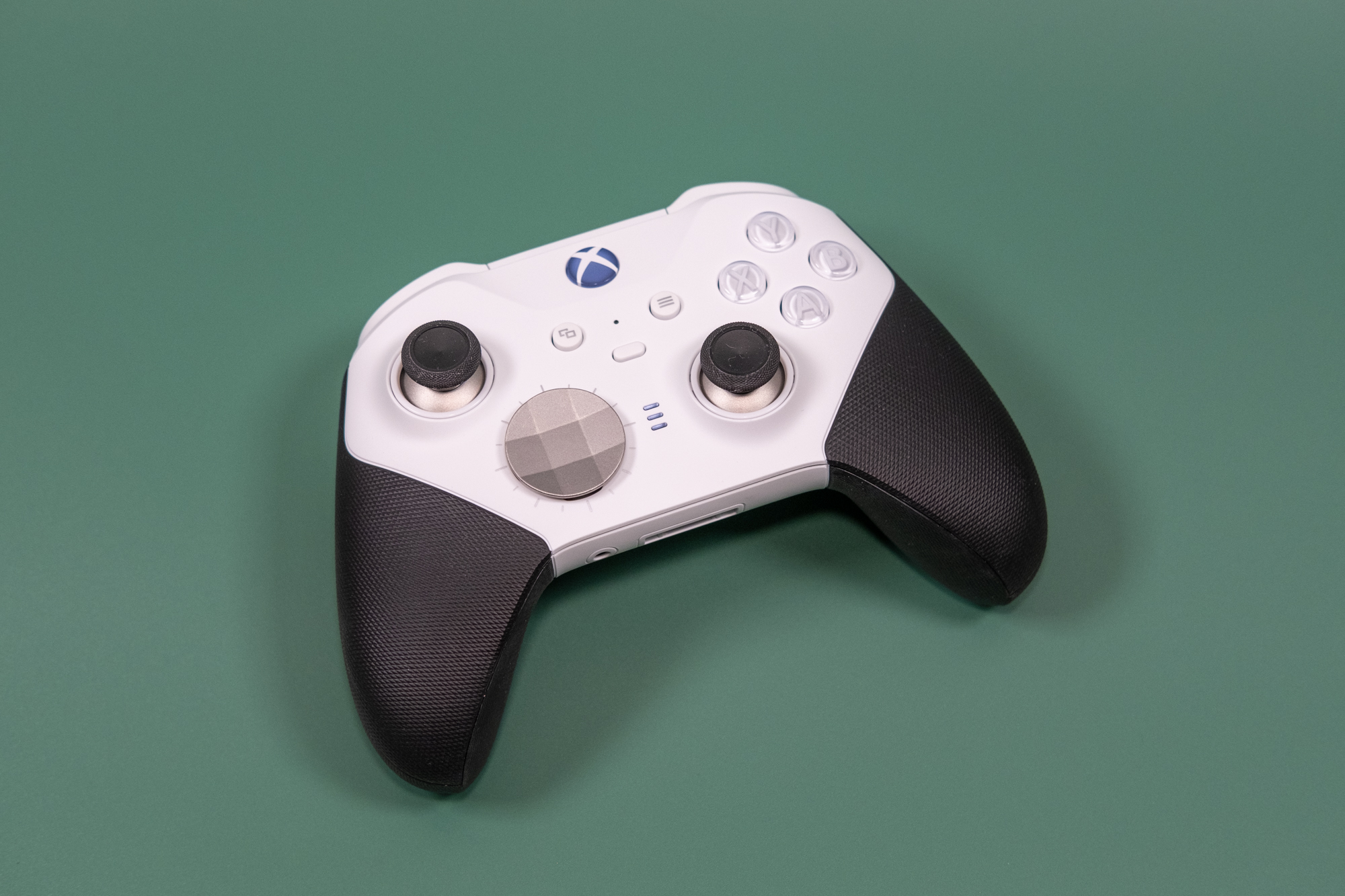 Expert’s Rating at a Glance
ProsSlick two-tone colorway and improved gripsIntegrated rechargeable batteryUSB-C and Bluetooth provide broad compatibilityCustomizable profilesConsRear button slots go unused without the $60 accessory kitMore than twice the price of standard Xbox controllerOur VerdictThe Elite Controller Series 2 Core is a major functionality upgrade over the base model Xbox controller, but most “elite” gamers will want the accessories to complete the experience.
Price when Reviewed129.99

Microsoft used to only offer one Xbox controller. Third parties could fill specific niches. But no more. It launched the Xbox One’s first Elite Controller and then followed it up with the Series 2 Elite controller. However, at almost $200 it’s pricey, and even dedicated gamers may scoff at the expense. Now, the Elite Controller Series 2 Core has arrived. This controller has a few aesthetic changes from the standard Elite, and it doesn’t come with the accessories kit, but it’s priced at a more reasonable $130.

If you don’t need all the add-ons, the Core is a great way to save some cash while getting a more feature-rich Xbox controller. If you do end up needing the accessories, it will cost you more. For some gamers, this may be the best option.

Microsoft’s Series 2 Core controller has the same shape and profile as the Series 2 Elite, which itself is almost identical to the 2020 base model controller that ships with the Xbox Series S and Series X. If you’re coming from the regular controller, as most will, the first thing you’ll probably notice about the Series 2 Core is the rubberized grips. They feel more secure than the standard Xbox gamepad’s all-plastic design. The Elite Series 2 has the same texture, but the entire controller is black—the Core has a two-tone white/black colorway that we think looks pretty sharp.

The USB-C port allows for charging and wired playback, while the pairing button is on the top edge. It also comes with an 8-foot USB A-to-C cable. One thing you won’t see is a seam for the battery compartment. This controller, unlike the base model has an integrated rechargeable lithium battery. For that luxury, you’d have to upgrade to the Elite Series 2 at $180. Look farther down on the back, and you’ll understand why the Series 2 Core is only $130.

The Core doesn’t include Microsoft’s accessory package, but the controller is fully compatible with it. You have four slots to hold the rear paddle buttons. Not having them makes the controller look a bit incomplete, but admittedly, you’re not going to spend a lot of time staring at the back of your gamepad. You can also find switches on the back to adjust the travel of the triggers. That’s useful if you want to tune the experience for specific games. For example, you might prefer the shorter throw for shooters. However, the longer travel is perfect for racing games, where the throttle is your trigger. Although the switches are not easy to adjust, they can be fiddly.

On the face of the controller, you’ll find all the buttons in the usual Xbox layout. The ABXY cluster doesn’t have the color-coding of the cheaper controller, which makes for a more understated look. There’s also an LED profile indicator in the middle. The dpad is the same shape as the Elite Series 2 full-priced Elite Series 2. It feels more comfortable under your fingers than the plastic dpad. The Core has the same removable controls and features as the noncore Elite gamepad. Both the d-pad and thumbsticks are held in place with magnets, and they feel completely stable—no wobble or clicking—until you pull straight up. Since the Core doesn’t come with the accessory bundle, you’ll probably leave these in place.

If you’re switching from the standard Xbox controller, you’ll notice the added heft of the Elite Core. It’s 300 grams (10.58 ounces), whereas the regular controller (with batteries installed) is 250g. It’s still balanced and comfortable enough to use for long gaming sessions. The adjustable triggers also help to limit unnecessary movement as most games don’t need the full range of motion.

The Elite Core is capable of doing so much more. It needs firmware updates. In fact, it won’t work correctly out of the box until you update it. On Windows, you’ll need to download the Xbox accessories app, but the Xbox console will already know how to update your peripherals.

Microsoft says the controller can run about 40 hours wirelessly on a charge, and that’s only a tiny bit higher than our real-world numbers. The cable can run so long that you might lose sight of it, but the charger charges with standard USB C. There are pogo pins on the back for the controller charging dock, but that’s an unnecessary add-on when USB-C is so prevalent.

All buttons on Elite Controller Series 2 Core have a smooth, tactile feel. The sound is slightly less harsh and deeper than the standard controller except for the triggers which are louder if you use either the middle or short travel positions. We’re impressed that the thumbsticks feel so solid even when you’re spinning them furiously—you’d never know they pop off unless you pull upward on them.

The 2020 controller was cheaper and had a share button at the top of the face. However, the Elite Core has more. The button in that position lets you switch between the controller’s three customizable profiles, as indicated with the aforementioned profile LED indicator. The profiles let you control what each button does, adjust your trigger dead zones, tweak the vibration, invert the thumbsticks, and even change the Xbox button’s color.

If you need more functionality, the Elite Core offers it. You can assign a button to “shift,” which activates secondary functions for any button of your choosing. Although you don’t have instant access to the share function, this upgrade is still very powerful. However, you may not have a button that you can use to shift unless your purchase the accessory kit.

You do miss out on some of the controller’s functionality by not having the accessory kit, which Microsoft will sell you separately for $60. That puts the total price slightly higher than if you’d just bought the non-Core Elite controller, which comes with the kit.

The Elite Core gamepad is compatible with the Xbox Series X, S and can talk to many other devices via Bluetooth. To pair with other devices using Bluetooth, long-press and hold the pair button beside the USB-C port. Next, open the Bluetooth app on your phone. A double-tap of that button will move the controller back to the Xbox, if it’s paired with one.

Microsoft’s Windows OS naturally has full integration, including the Xbox Accessories app for conjuring the controller’s advanced features. You can also connect it to an Android or iOS mobile device over Bluetooth, but you’ll have to use the desktop app and a USB-C cable to change settings.

Speaking of the USB-C port, that’s another way you can connect to the controller. It can be used in wired mode with both Xbox and PC. While we had no trouble using the base model Xbox controller in wired mode with Android, that’s not the case for the Elite Core. For whatever reason, it will only charge when connected to a phone’s USB-C port.

Should you purchase an Elite Controller Series 2 Core

The Elite Controller Series 2 Core adds a ton of features you don’t get with Microsoft’s standard controller, including profiles, better grips, button remapping, and adjustable triggers. You will lose out on the hardware’s capabilities by not purchasing the bundled accessory kit that comes with the Elite Series 2 kit. The rear-facing paddle button connectors are useless unless you spend more on accessories, and it’s pointless to have removable buttons when you don’t have the alternative controls.

The Elite Core is a superior gaming experience for PC and mobile gamers. You can take the Elite Core controller with you on the road and charge it using a regular USB cable. However, the long battery life might mean that you don’t need to. It is a pity that smartphones do not have wired USB-C support.

For casual gamers who don’t want button profiles or adjustable triggers, it’s best to stick with the cheaper Xbox controller. The Elite controller set should still be purchased by serious gamers. It’s more expensive, but you get all the accessories you might end up buying anyway. The cost of buying the Elite Core and accessory kit separately is $10 less than purchasing the entire Elite bundle. The Elite Core is a great piece for those in the middle. The $130 asking price is steep but justifiable as long as you are confident you won’t want the accessories after you start tinkering with the Elite Controller Series 2 Core.